Basing my company valuations on book value is nice and everything, and has a lot of historical and empirical support, but I’ve always had a nagging doubt about my core assumption in relation to earnings:

“”Any reasonably competent management should be able to produce returns at some point such that the company is worth its net asset value.””

This is the basis on which I expect to exit the companies I own.  Most companies that are priced well below book value do eventually end up back above it and usually via a higher share price rather than a lower book value.

Reading through some of the obligatory writings of a certain Mr Buffett however, highlights a consequence of ignoring earnings:

“When Buffett Partnership, Ltd., an investment partnership of which I was general partner, bought control of Berkshire Hathaway, it had an accounting net worth of $22 million, all devoted to the textile business.  The company’s intrinsic business value, however, was considerably less because the textile assets were unable to earn returns commensurate with their accounting value.  Indeed, during the previous nine years (the period in which Berkshire and Hathaway operated as a merged company) aggregate sales of $530 million had produced an aggregate loss of $10 million.  Profits had been reported from time to time but the net effect was always one step forward, two steps back.”

The risk to an investor like me is that a company will never sell at book value because it is just not worth that much even with the best management.  Looking at my own holdings, Northamber had produced average returns on equity of 3.8% over the past decade, 600 Group had managed 2% and MJ Gleeson 2.3% (according to Sharelockholmes).  Not exactly electrifying and not a return you’d want to leave the safety of a savings account for.

But does this matter?  Well, perhaps.  Looking back at my ex-holdings and plotting the annualised returns I got from buying and selling them against their 10 year ROE I get the following: 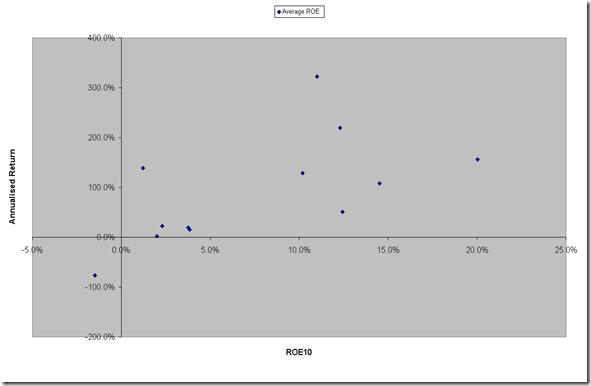 Unfortunately that’s not a lot of data,  but it’s a start for sure and does seem to imply what I’d intuitively expect – that those companies with higher average return on equity find it easier to return to book value more quickly and profitably.  I think it’ll be another year or two before I have enough data to draw a more solid conclusion though (unless there’s some research out there already).

But if ROE is useful then how should I integrate it into my system?

As a starting point, I have decided that a company must have a minimum average ROE of 5%.  The goal with this is to skew my holdings toward the right side of the above chart.  It might also increase my dividends, but I haven’t check that yet.

In addition to that hurdle, I have adjusted my buying and selling price points.  Previously I’d sell if the price/book was 1.  Now I think I’ll sell when the price/book ratio is ten times the average ROE, or when it’s 1, whichever is lower.  The point here is that in my imaginary world most investors will settle at some point for 10% returns (after all that’s what the stock market historically makes), so a company with an average ROE of 8% should at some point sell for 80% of book value giving the shareholder a 10% return (assuming all earnings are paid out as dividends, but that’s another story).  But, if the company has produced returns above 10% then I take the pessimistic view that they may not match such lofty heights in future and that even if ROE has historically been say 15% then I will sell at price/book of 1 rather than 1.5.

Using this approach I have decided to jettison Northamber, 600 Group and MJ Gleeson from the portfolio, as they were all priced above their ROE10 times 10 valuation.  I’ve replaced them with AGA Rangemaster (average ROE of 8.7%), Barratt Developments (average ROE of 18.5%) and Vislink (average ROE of 9.5%).  A bit drastic perhaps, but at least none of the jettinsonees were sold at a loss (annualised returns of about 14.8%, 2.2% and 22.6% respectively) and both AGA and Barratt bring some well known names into the fold, which makes a change.

Last but not least, I sank some more money into Luminar just to thank them for not going bust yet.  Good work chaps, keep it up and perhaps I’ll get that 462% gain my spreadsheet says I’m due.