Over the years there have been many studies into how different investment strategies affect your potential returns over the long term.  Often these studies involve the selection of companies based on almost childishly simple criteria which ultimately turn out to uncover some hidden truth about market efficiency and the value premium.  Since I use these simple screens to make the bulk of my investment decisions, it seems prudent to check that these simple formula still work when applied to the market as a whole.

As you can see some did well and some did badly.  The average return was 23.7% so this subset of companies strongly outperformed the FTSE 100 and similar indices, but that’s not the point of this exercise.

According to much research (not cited here), sorting by P/B (price/book ratio) is likely to show some sort of trend where low P/B stocks outperform the average and definitely outperform high P/B stocks.  Sorting (descending) by the estimated P/B from one year ago** produces this: 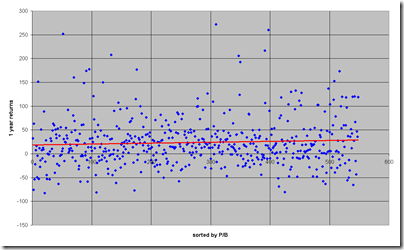 The trend line does seem to indicate what the literature would have us believe – that on average lower P/B stocks have had better returns in the last year.  Breaking the results into five equal groups, the average returns of each group were:

Before getting too excited though, remember that low P/B companies tend to be smaller and less liquid, i.e. with a wider spread.  I think that the extra returns will be enough to outweigh the spread costs, but spread size is an important factor in low P/B and small cap investing.  Something to cover at length another day perhaps along with dividends.

Another point is the spread of returns.  In each group some companies did fantastically while others did terribly.  Unless you can spot the difference beforehand you need to be sufficiently diversified, otherwise you could end up with a massively under performing portfolio no matter which group you pick from.

The next well known and highly tested metric is market cap.  When sorted by market cap (descending) from one year ago*** the returns look like this: 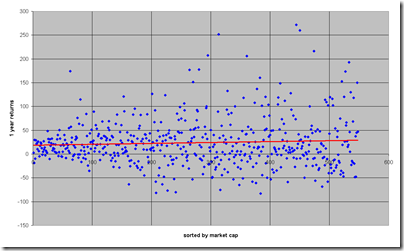 And the quintiles again:

So market cap is still a very useful tool in the selection of outperforming companies.  However, the large spread issues are even greater here as by definition the smaller outperforming companies in group five are small and likely to have greater spreads, especially on the AIM index where most of these shares live.

Just from looking at the plot it seems that the variation of returns from each company is much less for big companies (on the left) than for small.  An efficient market proponent would probably say that’s part of the reason for the small cap premium, the variability of returns is that much greater.

The final metric is ROE10 (ROE averaged of the last 10 years), which on its own is most definitely not a value metric as it says nothing about price.  I’ve included it here though as it’s a GARP metric which is closely related to value investing, but more importantly I’ve started using it recently to sift for winners.  It can be combined with the size and P/B metrics to aid and perhaps enhance them.  Sorting by ROE10 (ascending) gives the following results: 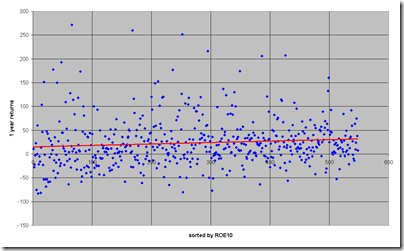 From this it seems that investing in high return companies turns out to have been more than worthwhile, regardless of the price paid for the shares, which is what growth investors have been saying all along.  Note also that the spread of returns in the top performers (right of the plot) seems to be far less than that of top performing small cap or low P/B stocks.  Interesting.

Now onto some combinations.  If I multiply size and P/B it gives: 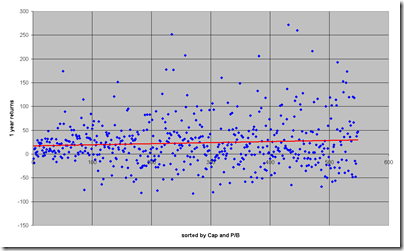 Which if we look at group five, the smallest lowest P/B stocks, we get the highest returns so far, 31.2%.  Of course this is just a spreadsheet based on data with things like survivorship bias and other reliability issues, but it’s still nice to see that combining size and P/B gives the expected outcome of higher returns.  Note though that group one is a bit of an anomaly (large cap high P/B stocks) with very few losses; perhaps this is the UK large company premium which has been found in a couple of studies.

Finally if I combine P/B and ROE10 I get this: 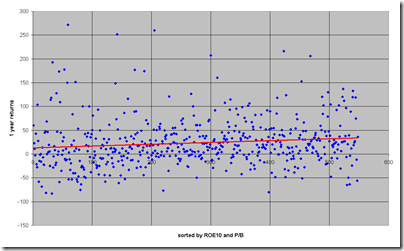 In this case you have to ignore the first 115 or so companies (the first group pretty much) as they are all negative ROE10 companies where the results are messed up by the negative value.  However, I wouldn’t recommend investing in them anyway as a negative ROE10 is not a good thing.  The remaining four groups show a nice progression of returns up to a high of 31.6%.  What’s also nice about this group is that you get the high returns without always being in micro cap stocks.  The estimated average market cap of group five a year ago was 2.5 billion and less than half the companies are on the AIM index, which helps keep trading costs down via a smaller bid/ask spread.

In summary, value screening still seems to work; or at least it did last year.  Adding ROE or perhaps any measure of earnings into the mix probably does have some benefits.  Of course there are many more screens, as many as investors can dream up; but whether you use this approach, the Magic Formula, low p/e or some other system, screening definitely still has something to offer the rational investor.

* Data from Sharelockholmes.  5 companies from over 550 were removed as outliers returning over 400% in the last year.  Although keeping them in would have favoured the P/B ratio’s predictive ability, by the other measures they were random and skewed the data so I took them out.  Of course in the real world you can’t do that, so perhaps that’s a good reason to pick low P/B stocks, to increase the chances of picking up a mega-mover.

** P/B 1 year ago is calculated from the current P/B and the last years returns, i.e. assumes that book value and the number of shares was unchanged.  This is a naive assumption but I don’t think it is too unreasonable and hopefully it hasn’t skewed the results.

*** Market cap 1 year ago just relies on the number of shares on average being the same, which is a reasonable assumption I think.