Tullett Prebon is an inter-dealer broker, which basically means they act as a middleman between commercial and investment banks and other parties.  If somebody wants to trade in treasury products, interest rate derivatives and fixed income, they go to Tullett Prebon.

They have a somewhat convoluted history, including mergers, takeovers and de-mergers, all going back over some 140 years. At various points the company has been known by many names, including Prebon Marshall Yamane, Tullett Liberty, Collins Stewart Tullett and Tullett &Riley.  Throughout most of this period they have been one of the largest brokerages in the industry.

I couldn’t review Tullett Prebon without mentioning their CEO, Terry Smith.  For those who don’t know, Terry is a high profile figure in the City and in the financial media; known for his ‘no nonsense’ approach and for being ‘outspoken’.  From my point of view, I’m much more interested in the fact that he has started his own investment fund after successfully running the Tullett Prebon pension fund to a handsome surplus.

Fundsmith, as his fund is known, is interesting because of the investment philosophy.  If you checkout the Fundsmith site and look at the Owner’s Manual,you’ll find a very enlightening and readable document.  Overall, the investment philosophy is similar to mine and Warren Buffett’s (although I must admit that I’ve learned more from Buffett than he has from me).

Almost all of what’s written in that Owner’s Manual applies to what I’m doing here.  There are differences of emphasis, such as Fundsmith’s desire to own companies which sell consumer non-durables.  I own Reckitt Benckiser, which fits into this category, but I also own BAE Systems, which certainly doesn’t.  But the gist of it; the concentrated holdings, high quality companies, growing companies, good returns on retained earnings, good cash flow, high earnings and dividend yields; they’re all components of my approach. Of course none of this is surprising since we’re both effectively students of the master, Warren Buffett.

As time ticks by I’ll be checking in on Terry and his Fundsmith fund to see how we compare.

My key metrics as always are revenue, earnings and dividend growth over the long term.  In this case they’ve all grown substantially but not always consistently.

Return on equity has been around 20% on average, although trending upwards over the years.  Return on retained earnings is around 24% in the last few years, which is very good.  That means management have had a 24% return on each pound which they didn’t pay out as a dividend.  At that rate I’d rather have them invest the earnings than me, so I don’t mind that they only pay out about a third of earnings as a dividend.

Although past performance is good, it’s not clear whether this is down to the management being exceptional or just lucky.

If you look at their bigger rival, ICAP (the number one inter-dealer broker in the world) you’ll see that ICAP has had just as good a run of it.  For example, their revenue,earnings and dividend history is more consistent and about as impressive.  Looking further afield it does seem that the inter-dealer broker industry has had a bountiful time in the last decade.

This doesn’t mean that Tullett Prebon aren’t a good investment, it just means that I can’t rely on their past performance as an indication of some kind of durable competitive advantage, which I don’t think they have.

Despite having historic growth rates of around 15%, the company has a PE of less than 8 and a dividend yield above 4%.  Those are better than you’d typically expect of a relatively fast growing company.

So why are the shares cheap? From a market point of view, valuations are low in general because of the recession and lack of investor appetite. Looking beyond that, the company had falling revenues last year and after the interim report in August it seems like revenues may fall again.  Some of this weakness is down to a high profile ‘broker raid’ from rival outfit BGC.

In a sequence of events that highlighted exactly the sort of risks that brokerages of all flavours are susceptible to, BGC is alleged to have had inside help to lure away a large number of brokers from various Tullett Prebon offices around the world.

Brokerages will always have this problem.  Their brokers are where revenues are generated and often it’s the brokers who hold the real earnings power within the company.  If a group of brokers get up and leave, either to set up on their own or to go work for a competitor, a big chunk of revenue goes with them.  At Coca Cola that can’t happen as the earnings power comes from the brand and the drink, not the employees (sorry to anyone employed by Coca Cola).

The issue is largely resolved now and only seems to have affected revenue by a few percent.  My guess is that a few years from now there’s as much chance that this episode will have been positive for the company as negative as they update their management structure to cope with these threats.

Some have said that brokers are like lawyers, “win or lose,they always get their fee”.  So they have good cash flow and don’t need or have much debt.  This means that if revenue drops off they just pay their brokers less and close an office or three.  It’s not a business with large capital expenses or fixed overheads to worry about.

As you can see, the projected returns are 330% from a starting point of 373 pence.  Please don’t forget, these projections are just one tool of many to compare one investment with another.  I don’t expect the future to look like this,but it might look something like this.

In terms of reasons why the future might not look like this, the key one seem to be regulation of the OTC (Over The Counter) derivatives market, where the company is heavily involved.  There is no clear indication how this will pan out, but management believe this will have a positive effect as it will clearly define the roll of the broker.  For now I’ll take their word for it.

I’ve added Tullett Prebon to the model portfolio on 5th September 2011 at a price of 362p (slightly down from the projections above).  As usual I’ve also added them to my own pension pot.

Just to keep you up to date on where things stand now, the portfolio is below, including the 5yr total return projections.  The point of this portfolio is to buy companies where the 5 year return seems attractive and to sell them when it becomes less attractive.  I’m still in the build up phase to 20 companies which I hope to get to in the next couple of months.  After that I’ll buy and sell one holding each month to mildly churn the portfolio towards the best investments.

My personal account holds all these companies plus a few others that don’t quite fit the ‘high quality’ criteria. As you can see, all of the companies in the portfolio are near the top of their respective fields. 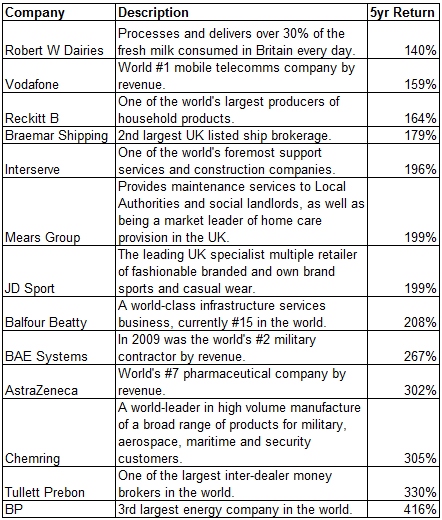